You have decided that you want to add another member to your family or you need someone to wait for you at home when you return from work. In any case, buying a pet is a great choice because your dog or cat will bring you happiness and fun for many years to come. People usually opt for a dog or cat, depending on the space they have available and what they want to get from the pet. If you have decided to buy a puppy, we congratulate you and we know that you will not regret that decision.

However, with all the fun that awaits you, there is also a lot of work ahead of you. You have to provide a lot of things to the puppy before he arrives, and also give a lot of attention to him once you take him home. Training is one of the things that are most important, so to avoid having problems with the dog’s obedience or socialization later during his life. We believe that you have been thinking for a long time about which breed to choose and that you then, like many in recent years, decided on Goldendoodle. This breed has fantastic characteristics, so it is very popular. We’ll tell you tips and tricks for training a Goldendoodle puppy, and also a thing or two about the breed itself.

In order to properly know how to approach the training of your puppy, you need to know a little more about this breed and its character. Because it is the character of each breed that is crucial to how a dog’s training will be approached. This is a relatively new breed of dog and first appeared in the 90s with designer dog breeders in the USA and Australia. It was created as a mixture of Golden Retriever and a Poodle and has all the best characteristics of both breeds. That is why it is most often used as a companion dog but also for other purposes such as therapy or guide. Another great feature is that they do not shed, so they are considered hypoallergenic and are also suitable for people with allergies.

They are very intelligent, sociable, active, and non-aggressive so they are not complicated to train. For all these reasons, they are considered to be the simplest hybrid dog breed for training. There are specimens of different sizes, so it is up to you to choose what you want. These are some of the basic features that you need to know, and you should definitely read even more about Goldendoodle. There are websites that are ideal for the owners of this breed, like We Love Doodles where you can find all the necessary information, read buying guides, and much more.

Tips and tricks for training a puppy

While this is a breed you don’t have to start training with too early, it’s still a big mistake to wait a few months. When you just bring a puppy into the house, it will be too small and then it is not the right time. But after a few weeks, you should start with the basics. Because the longer you allow him to adopt bad habits, the harder it will be to change them later. So immediately start correcting bad behavior, and after a few weeks start teaching him basic commands such as sit, stay, and the like.

Just like when we talk about a child, a puppy can’t hold attention for long and you won’t achieve anything if the session lasts too long. It is better to do it several times a day for a few minutes because that is the only way he can understand and adapt what you say and show him. Remember that a dog may only be following one action at a time, so don’t let these be complicated commands, especially in the beginning. And don’t move on to learning the next command until you’ve learned him the previous one.

As soon as he receives all the necessary vaccines, you have to start socializing him right away. It is important that you constantly introduce him to new people, animals, and places. Only in this way will you get a socialized dog that you will be able to take everywhere with you, without fear of him being scared or becoming aggressive. A poorly socialized dog will almost always develop aggression or excessive fear. So take him to the park to meet other dogs, but also introduce him to other species of animals, such as cats. Allow other people to pet him and take him to unfamiliar yards so that no environment frightens him.

4. You need to have a clear set of rules

Even before you buy a puppy, come up with a set of rules that you will apply throughout the years of having a dog. Decide immediately whether he will stay inside or outside, whether he will be able to lie down in your bed and the like. Only in this way will you avoid creating confusion in your dog’s head. If you allow him something once and forbid him to do the same later, he will be confused. Goldendoodle is very active and curious, so if you don’t set clear rules for him, expect him to enter the house and explore every corner.

You can motivate your dog with praises and, above all, rewards. He likes to please you, but he loves praises and awards even more. Introduce rewards for each positively executed command and adopted rule. Praise and encourage him regularly, and when it comes to some greater achievement, then reward him with dog treats. Of course, it is important to use dog treats according to the age of the dog. And also watch his caloric intake so to avoid him gaining too much weight.

By choosing to buy a Goldendoodle puppy you have made a superb choice and you will not have a hard time while training him. However, do not forget that it is a living being and that he should be given maximum attention as if it were a child and not a dog. 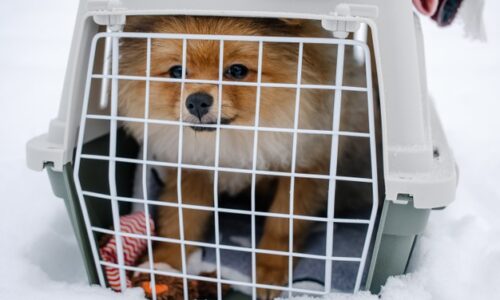 By Herman BarnettAnimals, How to

How to Choose The Right Crate For Your Dog